I was asked permission to include the photo of Nathan – #6.  The author told me he gets about 500,000 hits a day on this site.  I am thrilled for the attention for Childhood Cancer Awareness

I didn’t get around to posting but yesterday marked 11 years of marriage to my wonderful husband, Luke.

We were driving back from the Denver airport as we noticed it was almost exaclty the time of our wedding on east cost time.  Luke was supposed to come home Friday night to Colorado Springs but due to airplane problems had to spend the night in Minneapolis instead.

Earlier in the week I was talking to a friend who, along with her husband, watches the girls for us when we go to our grief group.  She had been sick for the last one and had been wanting to make it up to the girls.  She suggested Saturday and then it dawned on me that it was our anniversary.  So – we got to go out last night and we had a really nice time.

I had to laugh when I was trying to get ready to go out to the sounds of  football in the background and screaming, hyper kids.   Eleven years of marriage also brought three kids.  There will be peace and quiet at some future anniversary.

These are two of the things that Julia asked me to put up on her wall above her pillow.  She colored the cross in Sunday school for Nathan. 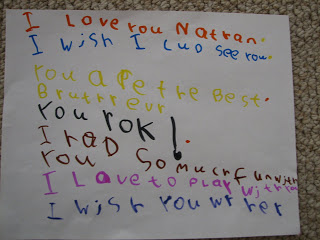 When I put them up I added this picture as well.

As usual I haven’t blogged because I mostly have a swirl of things running around my head. All the PINK breast cancer stuff is annoying me. What about childhood cancer? I was just commenting on someone else’s blog and it made me think of the poor shoppers confronted with a gold (childhood cancer color) mixer at Target. “Gold – oh that must be to support research for childhood cancer – Oh my God – I’m not buying that! Now I am thinking about kids having cancer and I don’t want to shop anymore.” I am glad there is so much awareness now about breast cancer. I have known women with breast cancer. This is not against them but is about moving forward to children.

I am also cranky because I haven’t been feeling great and have been eating horribly – the kind of mindless eating that is bad for you. Purely emotional.

Luke has been having all kinds of problems with his ears and allergies and has been swamped at work and is now travelling this week. He hasn’t been all that cranky even though Lauren has been extra cranky lately and I have been all but unavailable to him – sitting here behind all my walls where I retreat to. The problem is, when I do that, most people have no idea because I can easily function. In fact it is easier than ever to deal with casual relationships when I am like this. It is my close friends and family that bear the brunt of it.

Furniture was rearranged this weekend. Julia now has Nathan’s dresser and there is a shelf on her wall with his things that were on his dresser (at her request). Thank goodness at least I can blog about this because I haven’t really talked to anyone about it and it was really hard – but how does one just bring it up in conversation. “Oh and by the way I took all my son’s things down from his room and put them on a small shelf. This small shelf now represents that my son used to live in that room.” No one I will let myself really talk to about that so I just stuff it inside me. So – I guess it at least comes out here.

One thing I really appreciated this weekend. I went to a girls night at a friend’s house. Most of these women I know only very casually. One of them came up to me and told me that she didn’t feel right not saying anything and she didn’t know how to say it but she wanted to tell me that she knew Nathan’s story and that she admired the way I seem to be coping with it all and that she just didn’t feel it was right all these times she has chatted with me to not say SOMETHING about what I had been through. So many people, but especially all the moms I am constantly around, have no clue what to say to me and more than that probably don’t even want to think about it. I mean, I am just proof that something like that could happen to them. It is too scary. So – nothing gets said. I have prefected answering the “how many kids do you have” question. I do it is in such a way that I mention Nathan last and say that he died and then I very quickly CHANGE the topic lest I have to stand there and watch them try to get the shocked look off their face and try to come up with something to say. I tried to stonewall the dental hygenist last week. She asked if I had kids and I just said yes. She later asked if they were in school and I just said yes. She finally ended up asked me how many and so then I was stuck with answering.

Anyway – I guess I have managed to spew some of the thoughts that have been hanging around inside me. If you read this far – sorry and thanks.

Luke has been gone all weekend camping with his brother, Josh.  I hope they haven’t frozen – it is a little cold here.  He did take the van so in an emergency, they could sleep it that.  I hope to hear from him later today.

I am feeling pretty good about making it through the weekend with the girls fairly sane.  I have several friends with deployed husband and husbands that travel almost 100% of the time so I have to acknowledge that I am a wimp.

The weekend included an impromptu invite to my house to a young couple being interviewed by my church and I am happy to say my house was clean enough to make that happen.  They were given my name as someone to help them get a feel for the neighborhoods and schools in town.  Luke and I have been working hard at keeping our house much neater and cleaner than in the past and so far it is working well and it was nice to see the positive outcome of doing so.

Last night was  a milestone for Lauren.  I have been talking to her about the bed in her room for a while and about how pretty soon she could start sleeping in that instead of her crib.  Last night after I rocked and read to her she got down and sat on the bed and said she just wanted to sit there for a minunte.  I told her that she could sleep in the bed if she wanted.  She said yes and I snuggled her in and she did great.  The crib will come down very soon.  That will be a bit sad.  It was down for about a year in between Julia and Lauren but this time it will be down for good.  It was nice not having to get her out of her crib this morning but I did meet her at the door as she was heading down the stairs just to check on her and so shortly thereafter she was calling me to feed her breakfast.

It also helped me get through the weekend knowing that this morning I would have four hours to myself.  Lauren is an a moms morning out program and this is her second day going (she started last Wednesday).  So – I am typing this from Panera, drinking coffee, by myself.  Ahh….

How much is a mom supposed to entertain a 6 year old? She is moping around right now. So far today we went to a toy store to shop for a birthday party and then spent an hour an a half at the library where there was a 3rd birthday party going on for the branch was activities at food. She told me many times how much fun she was having and what a good day it was. We got home, had a late lunch and she played with Lauren and watched a movie. She then went to a birthday party for two hours and came home and had food (even though she ate at the party). Now she is sitting in the chair moping. I suppose part of it is that I denied her request to play a video game and she wants me to read a book but I can only see out of one eye right now (allergies) and the book is yellowed and type small.

It just frustrates me – I cannot provide entertainment 24/7. Even Lauren is entertaining herself – she is playing and talking to herself.

Posted on September 5, 2008 | 10 comments
I just love this picture…Julia is 4 months and Nathan is 23 months. He was always calm, gentle and loving even as a toddler.

How Can I Keep From Singing?
Create a free website or blog at WordPress.com.