I am not one to get into politics on here. Let’s just say I don’t really appreciate our current president. I appreciate him even less after losing 20 minutes of my morning sitting on an exit ramp of the interstate so he could have a nice clear road to go give his graduation speech at the Air Force Academy today.

Maternity in the late 60’s

Many years ago when my parents moved out of my childhood home I received boxes full of random stuff. I pulled out once such box the other day and found some things my mother had kept after having my brothers in 1968 and 1969. Click on images to read. 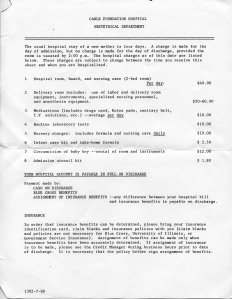 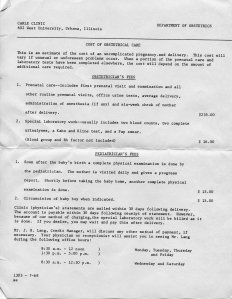 I also found the Hospital’s Maternity booklet. Here are some sample pages 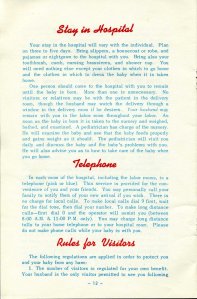 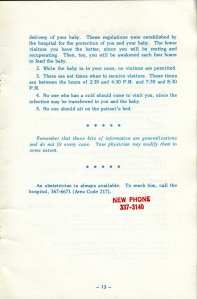 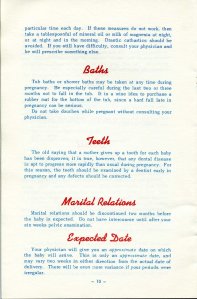 My favorite parts are about the father not being allowed in the delivery room and about refraining from sex for the last 2 months. Why?

Last night before bed we were talking about being cute – she said she wasn’t cute so Luke started to name other people and ask her if they were cute. After a few people Luke asked her if her friend Tori was cute she said “Tori is Definitely cute!” We hadn’t used the word definitely in the conversation at all. She said it really well too – it was very funny.

In my humble opinion of course – as a teenager in the 80’s. I listened to #1 on my iPod last night on the way home from choir practice and this list came to mind.

5. Carrie – Europe I had the sheet music to this and played it on the piano.
4. Love Song – Tesla
3. Patience – Guns N’ Roses
2. Silent Lucidity – Queensryche
1. Don’t Know What You’ve Got (‘Til It’s Gone)- Cinderella

Lauren and I caught a little Sesame Street today. They did a very clever spoof on “Deal or No Deal”. I don’t watch the show – but I have caught pieces of it in passing.

It was “Meal or no meal”. The muppet contestant had chosen a covered dish with a number. The question was if there was a meal inside the dish or not. There was a Howie Mandel muppet look-a-like. The pretty blond muppet opened the first dish the contestant did not pick and it was bubble gum …not a meal. Then the “baker” instead of “banker” called up. The baker was cookie monster. He offered one cookie. She said “no meal” and went on. The baker continued to offer he more junk food which she declined and she kept uncovering junk food in her unpicked dishes. She took none of the yummy deals and finally uncovered her chosen dish – which was a healthy meal and it was then described for the kids.

This morning as I sat in the choir loft getting ready to sing th introit I looked at he bulletin and saw we were about to sin “Joyful, Joyful, We Adore Thee”. I USED to love singing it but it was Nathan’s favorite hymn and we sang it at his funeral and so it is now hard to sing. I was definitely teary while singing it but did OK. The only thing is that they broadcast the services over the web and then zoom right in our faces us as we sing. So – I am hoping I didn’t get zoomed in on this morning. I am sure people might wonder why such a Joyful song would have someone in tears. Oh well.

How Can I Keep From Singing?
Blog at WordPress.com.