I am doing some housekeeping on iTunes (to benefit my iPod). There are some songs on there that I am always pleasantly surprised to hear but I hope no one else can hear them.

Please share yours in the comments (or on your own blog)

1. The Final Countdown – Europe
2. Don’t Know What You’ve Got – Cinderella
3. I Just Called to Say I Love You – Stevie Wonder
4. Baby I’m Amazed – Lonestar
5. Groove is in the Heart – DeeLite

I lived in the same house my whole childhood, until I went to college. My parents had the house built and moved in when my mom was pregnant with me. They sold the house and moved to South Carolina when I was in my early twenties. I loved that house and the neighborhood. If you stuck me in the house today blindfolded I could walk around the whole thing without missing a step. I often have dreams about the house. In some of the worst it has been torn down.

So – “my” house is for sale right now. It has a nice tour so I got to see many of the rooms. I was surprised that it actually brought tears to my eyes. In my alternate life I would buy it and move back to Illinois.

Of course, it wouldn’t be the same. I am sure this is all about childhood nostalgia. I had a really good childhood and that house represents that time in my life of innocence and happiness that can never be recaptured. Oh – to be back living in that house with my parents taking care of me and to has my most serious problems be about school and boys and clothes.

I have been neglecting writing anything personal here lately because I have had a post brewing. Some have asked me how I am doing. Here’s what I am struggling with.

How do you live your daily life with a child who feels fine but has a terminal illness?

I have the most inane thoughts throughout the day related to this.

I’m cleaning – I have a thousand papers from school and preschool. I don’t have room to keep them all but how do I throw away anything that Nathan creates? When he is gone will I hate myself for throwing it away? Will it be more of a burden because after he is gone because then how can I ever throw it away?

I am setting up my Upromise account. I have to funnel the funds into 529 accounts. I put it all into Julia’s – why bother putting it in Nathan’s – it will go to Julia eventually anyway.

Nathan is throwing a fit. He wants something that I have said no to. I am being consistent with our rules around the house by saying no. Will I hate myself when he is gone for making him upset?

I recently made a bad decision. I decided not to get new hearing aid molds for Nathan. This was right after his most recent scans and I felt that maybe things were going to start going south fast. I took him in because his hearing aids needed to be adjusted but I told the tech that for several reasons I wasn’t going to get new hearing aid molds. They are a little pricy – but not out of reach or anything. It was a decision made with my emotions. It turns out that with his hearing aids being turned up the fact that the molds were too small became a problem. Fortunately for me – the tech called the school audiologist the next day and she and the teacher of the deaf (who I both know) decided that they would go to the school and take the impressions and give Nathan new molds.

I just don’t know how to make decisions about Nathan. Sometimes I feel like I am doing things right and other times I know I am not. I know people who turn their lives upside down for their children in this situation. They let them stay up all night – take them to buy tons of toys etc, etc. I just don’t think that is the best thing..especially because we have Julia too.

I am glad we went to Disneyworld. That was one decision I made that was right. Otherwise I still tend to feel that life as usual is the best thing.

So – I am just left with my own struggles. It is awful but that movie title keeps coming into my head “Dead Man Walking”. He’s here but I can’t shake the thoughts of his future. He talks about being a teenager, or middle school or when he gets married and I just answer him as if that will happen when I know it won’t. It breaks my heart.

I know, I know…..people tell me that I can still hope for a miracle and I have not given up all hope but I am a realist and so I know the most likely scenario.

I try to be positive on a daily basis. All that matters on a given day is what is happening that day. Nathan feels great and I have plenty of time to feel awful when he feels awful so I really try not to think about it all – but then when I am doing the mundane things I can’t but help but be confronted with something that reminds me of the situation and there I am factoring in my decision Nathan’s future (or lack thereof)

So – there you have it. That’s where I am with all this right now. I could not think of a title that I could live with so untitled it is.

I read several medical blogs. One of them is a blog written by pediatric oncologist. I wanted to share a recent post that really touched me.

Here is a snippet
“I can tell you that nine out of ten people who learn that I’m a pediatric oncologist look at me as if I just told them that my dog had been run over by car. One out of ten, on the other hand, “get it”. They understand how amazing this work can be, how lucky we are to be able to serve our patients, and the joy of living that comes from living the full range of emotions with your patients. In order to make the other nine people open their eyes to the needs of oncology, it’s going to take a little something more than just showing them pictures of kids without hair. It’s going to take a little evangelizing.”

Some of you who know me well know that I have some form of night terrors/vivid dreams. Sometimes, they are relentless and other times I have weeks and weeks without them. I had been mostly without them for a while. The last night in Florida they came back and I can’t shake them. Fortunately they are not the scary variety but they are the repeating kind. This means that I awake with the same “visions” and scenarios over and over again. this goes on for what seems like hours. Right now I am stuck with a dream that I am on a disney ride and my bed is the “car”. Luke is asleep next to me and they are waiting for us to get out of the car and move along.

I probably woke Luke up several times last night. I just kept sitting upright and seeing everything in the room plus seeing the extra things in my dream.

That is the weirdest thing about my sleep issue. Whatever it is that I am dreaming I can still see in this state and I can also see my surroundings. I cannot be convinced that something is not there because I am hallucinating. Luke has learned the hard way not to debate me when I am in this state. He still does try to catch me when I leap over him running for shelter from the thing coming at me from the ceiling.

I guess I am lucky that I am not having the terrrifying version right now but I really would like to get off the ride tonight.

Last Thursday night at the fundraiser held for Nathan, his teacher casually asked me if I would like to go on the field trip with the class that happened today.

I stuttered out a yes and wondered out loud about childcare and such.

Then we went on our trip. I got an email yesterday from her asking if I could go.

The thing about it all was that I am not the type of mom who really wants to go on the field trip. When his teacher asked me I could tell she was offering something she felt was desired. Isn’t that what the typical stay-at-home-mom does?

I feel guilty because I am not one of those moms. I don’t volunteer in the classroom. If it weren’t for having to pick Nathan up for school to go to the doctor I wouldn’t ever set foot in the school because he rides the bus.

So – I kind of felt I should go on the field trip. What would that say about me if I didn’t want to go?

So I went. I am glad I went. I can’t say it was fun but I am glad to have done it. I got to bounce around in the back of a bus with 40 some first graders. I sat in an auditorium with several thousand firsts graders from schools throughout the city. There was a play with a boy and a mouse and they said the word underpants enough times to send the audience into hysterics. I fought falling asleep many times because it was dark and I am very sleep-deprived.

I got to sit by Nathan and see what his world is like with his class. I think that is why his teacher asked me to go.

I suppose I need to get out of my box a little more often.

We have returned from our trip to some very sad news. Our friend Gemma has passed away. Gemma was a beautiful little girl from Barcelona that we met in New York. She was very fun and affectionate and such a sweetheart. Her parents, Delors and Jordi, are wonderful people. We got to know Delors and Gemma very well and we are so very sad for the whole family.

We love you, Gemma 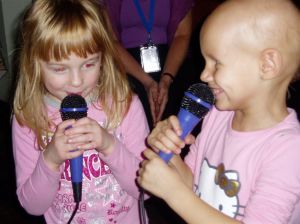